Did You Know SRK Hired A New Lawyer For Son? Was Aryan…

Is This Fruit Behind The Nipah Virus That Killed A…

Fact Check: Did IIT Kanpur Predict A Third Wave Of Pandemic From July 15?

New Delhi: Everyone is predicting a third wave of the pandemic saying it is inevitable. Health experts had started warning even when the second wave was at its peak. Now, the easing of lockdown restrictions, people throwing caution to the wind and the cases of Delta Plus variant, it is being feared the prediction may actually turn out to be true.

To top it all, there is a Facebook Post claiming IIT Kanpur researchers as predicting that the third wave will hit India as early as July 15. The post is backed by the image of a graph.  “As per IIT Kanpur model, 3rd wave can hit India from 15 Th July onwards. You will note that their prediction about the 2nd wave was absolutely correct,” reads the caption. 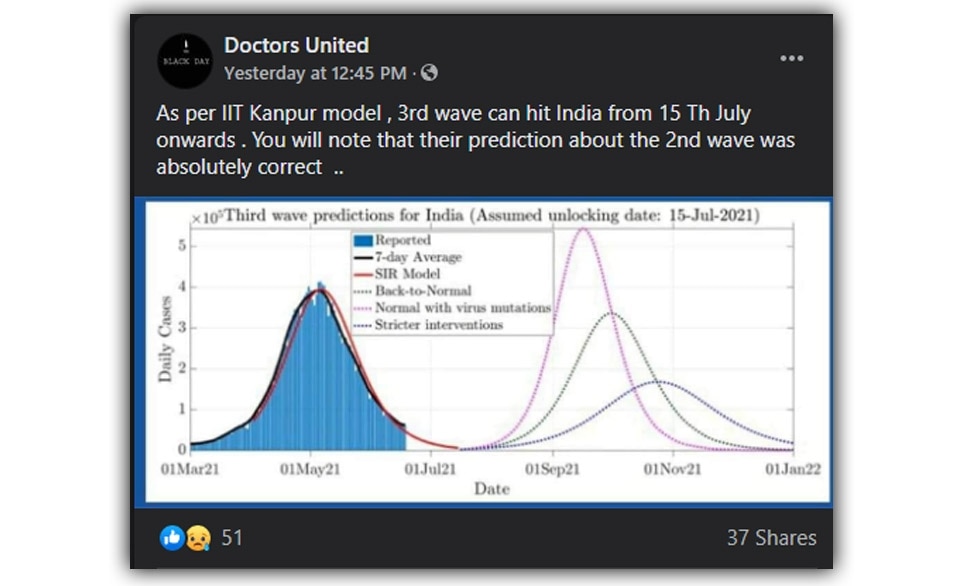 So, did the researchers actually make this claim? India Today found that the projection graph was indeed created by two IIT Kanpur professors. But what they said was based solely on the assumption that India will be fully unlocked on July 15. Besides, it did not take into account the effect of vaccination.

The detailed study on the website of IIT Kanpur reveals three scenarios, projected by professors Rajesh Ranjan and Mahendra Verma along with their teams India Today reported:

Scenario 1: Shown in the chart in the green dotted line. If life gets back to normal, the third wave peak can be in October, but it will be less severe than the second wave peak of May.

Scenario 2: Shown in the pink dotted line. If normal life resumes but the virus mutates, the third wave peak can come as early as mid-September. This will be more severe than second wave peak.

Scenario 3: Marked in the chart with the blue dotted line. In this scenario, strict Covid restrictions are imposed in the country. This could delay the third wave peak till late October, and it would be much less severe.

“We have assumed here that from July 15 onwards, life will be fully normal in the country. In that situation, cases will start increasing. It will be slow initially but the rate of infection will be faster later,” Professor Rajesh Ranjan was quoted as saying.

Also, the study has not considered the effect of vaccination. “Vaccination is known to break the transmission chain. At present, the model does not include vaccination, which should decrease the peak significantly,” it says.

Though experts are not sure how effective the vaccines will be on virus mutations, it is clear that there are circumstances that might alter the graph significantly.

Therefore, it will be oversimplification and misleading to say that IIT Kanpur has projected that the third wave of coronavirus will hit India from July 15, concluded India Today.

Link Your Vaccination Certificate & Passport On CoWin; Here’s How