11 Out Of 14 Dead In Copter Crash Involving CDS Rawat:…

Baltal: Union Minister for Road Transport and Highways Nitin Gadkari reviewed the construction work of the strategically important Zojila and Z-Morh tunnels on the Srinagar-Leh highway, which are under construction.

While speaking to the reporters outside the West end of the tunnel, Gadkari said all the projects undertaken by the BJP-led Centre must be completed before the 2024 general elections. 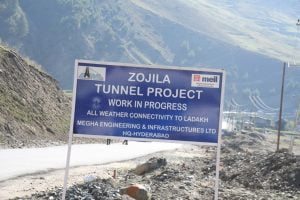 Asia’s Longest Bi-directional Zojila Tunnel is being constructed by MEIL. This will be strategically built at an altitude of 11,578 feet and will strengthen India’s defence system & economy of J&K and Leh-Ladakh.

Zojila Pass is the strategic link connecting the Leh-Ladakh region to Srinagar in Jammu & Kashmir, and with the rest of India. This Silk Route is most crucial for defence and economy activities of the region.

The region however does not have an all-weather connectivity, especially to Leh, the capital of the Union Territory of Ladakh. This has heavily hit the transport sector, thereby impacting the entire economy of the region. 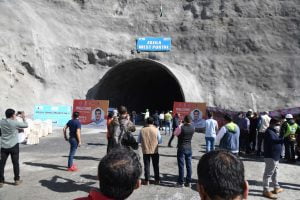 Presently, the road from Srinagar to Leh, is not open all year round, as it is not suitable for vehicular movement. Connectivity is limited to only five months in a year owing to extreme snowfall during winters. The existing Srinagar-Ladakh highway is closed from mid-November to April, literally cutting off this entire region from the rest of the world.

This is posing a big hurdle for the movement of the Army and military vehicles. The alternative routes are long-winding and time-consuming, resulting in huge expenditures.

Moreover, these alternative routes are closer to the Indo-China and Indo-Pakistan borders. Therefore, a strategic alternative was the need of the hour. This is where the Zojila Tunnel project comes in.

It may be recalled that Megha Engineering & Infrastructure Ltd. (MEIL), India’s engineering giant, bagged this prestigious project in October 2020. 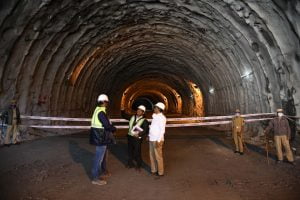 Once the Tunnel is completed, travel between Srinagar and Ladakh throughout the year, will become a reality. While the distance will be reduced (from Baltal to Minamarg) from 40 km to 13 km, travel time too will be reduced by 1.5 hours between the two Union Territories. The journey will be less strenuous as the roads will be evenly paved.

The project will lead to an integrated development of both the Jammu & Kashmir and Ladakh regions, at maximum speed.

The length of Zojila tunnel is 14.15 km. Once completed, it will be India’s longest road tunnel, and Asia’s longest bi-directional tunnel. Several bridges are being constructed along this route, and works are being executed at a brisk pace.

A connecting tunnel from Z-Morh in the National Highway-1 to Zojila tunnel will be constructed in the Zojila Ghats between Sonamarg and Kargil. The entire work is divided into two divisions in the 33 km span. 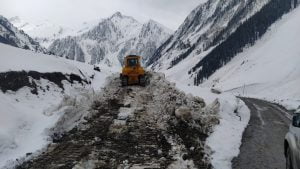 The first part involves the development and expansion of the 18.475 km highway between Z-Morh to Zojila. Along this alignment, about 3.018 km highway stretch will be expanded. The remaining portion of the highway (13.842 km) will be freshly developed.

The second division involves the construction of the 14.15 km Zojila tunnel, which will be a two-lane highway (9.5 meters wide and 7.57 meters high) in the shape of a horseshoe. The New Austrian Tunnelling Method (NATM), an advanced technology, is being used in these works.

Why Are Indians Getting Shorter While Globally Heights Are Rising?

Samantha Prabhu’s Item Number In Pushpa Turns A Chartbuster; Know How Much She…

Samantha Prabhu’s Item Number In Pushpa Turns A Chartbuster; Know How Much She Charged For It

Djokovic Banned From Entering Australia For 3 Years; Here’s What The PM Says